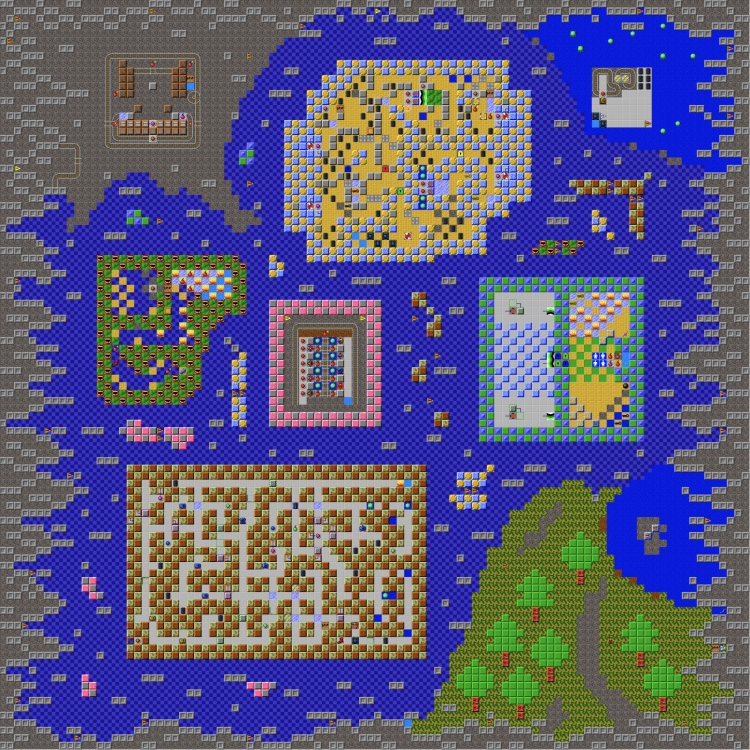 I took a break today from my ongoing Let's Play of the very enjoyable but lengthy 'Flareon1', and decided to take a peek at the latest file from H2O, posted yesterday. The levelset is called 'Rising' and features 8 levels. Playing through the set took me about an hour and 20 minutes.

The video of my playthrough can be found here:

The set begins with this massive untimed 99x99 bonus level which is unique in that it contains all of the other levels in the set. I call it a bonus level because the solution is trivial - just walk in a westerly direction and find the unguarded exit. However, there are bonuses everywhere and I'm sure finding an optimal route would be a challenge. I really like the pixel art (the trees and the path) at lower right, and it is interesting to be able to get a preview of the levels to come. However, I think it would be more interesting if there was at least a little bit of challenge in the level, and it was also pretty confusing on first play because I didn't know that all these rooms were previews of coming levels. I didn't 'get' it at first, but once I figured it out later it was a cool moment.

A nice little puzzle, fun to solve, feels like it's over too quickly though!

Also a cool concept, dodging the yellow tanks is easy but interesting. Again, the level is over so quickly! I could see combining this + RED INK + maybe a compressed version of GREEN THUMB all into one level. (I guess after my review of Explorer's Delight I must sound like Goldilocks-- "These levels are too long... these levels are too short..." Sorry.)

The central puzzle is awesome, and very fun to figure out. I'm less of a fan of the level's layout, but it works.

I enjoyed this one. Short enough it's not terribly frustrating, pleasing to the eye, and a unique gameplay concept.

Wonderful level with an unique, engaging theme. The length is perfect, just enough to be quite challenging, but not so much that it's a chore to restart the level after a mistake. Felt very satisfying to solve.

My favorite of the set. I like the use of the one-way teleport mechanism to create three separate, similarly themed teamwork puzzles. The top left puzzle did feel somewhat trivial compared to the other two (which were excellent!). I might consider starting Chip and Melinda off within sight of each other to emphasize that this is a teamwork level. The teleport mechanism plays pretty well! There are ways to drastically simplify the circuitry, but since it's not visible during play maybe it's irrelevant.

A lengthy maze level using blue tanks, green toggles, and... a three-way toggle mechanism! This was actually the most frustrating level in the set for me, mostly because I didn't quite understand that each of the pink buttons was actually controlling the state of all the pink walls, i.e. I thought that each pink button was only responsible for the pink walls in the immediate vicinity, and so it would confuse me to find a door open where I thought I'd left it closed, and vice versa. A hint might help. But overall it's a quality level and satisfying to solve.