Just an idea I had for a block-extracting level themed around using explosives (and drills...or something...whatever the keys represent...) to break apart a giant boulder.  I meant for there to be just enough blocks, but it turned out that you could save an extra one if you were really careful near the start, which is fine by me since it doesn't change too much.  Also, I just couldn't resist hiding the exit under a block with the theme of the level being what it was.

The level was originally named "Dynamite" (after both the concept and the Taio Cruz song) in the 33-level preview I released, but then another level by that name got into CCLP1 so at JB's suggestion, I renamed this before the final release to avoid confusion.

This is a really silly level...just an excuse to murder a bunch of walkers and blobs.  The title can be thought of as a double meaning, in that you're relieving stress on your part by getting rid of those troublesome monsters, and relieving the stress on the walls of the packed-to-the-brim rooms containing those monsters.  The chaotic ending is there to at least add some challenge...you might want to use the blocks to prepare an exit path for the monsters before you start freeing them.

This is, in my opinion, a pretty neat idea for a blue wall maze--you have environmental clues that tell you where you can walk, rather than having to oof on every wall.  In this case, you can see where each path turns and ends, as though you could see the joints and caps on a twisted nest of pipes but not the pipes themselves.  (I may have been thinking about the game "Pipe Dream" from the Windows Entertainment Pack as I built this.)  I kept the time limit low so that you would most likely have to use the visual clues to finish the level, rather than just pushing blindly on everything.

The idea was to use crossing monster paths to create a sort of maze, including paths that you can only travel through in one direction and some squares that you cannot travel through at all (as they are occupied every 2 moves).  The name comes from the back of a box of colored pencils, where it was shown as the name of a coloring technique: 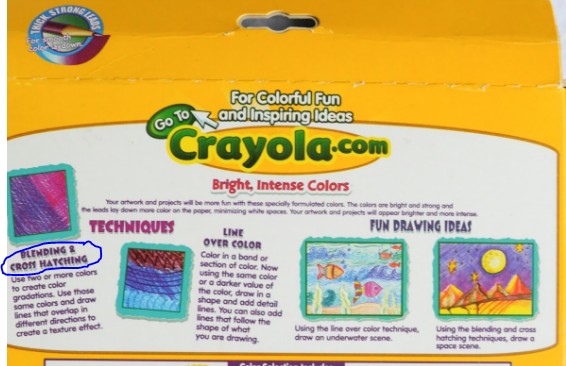 A very short dodging level inspired and named by a game called "Freeway" for the Atari 2600, which I have on a 30-game compilation disc for the PlayStation 1.  In that game, you have a limited amount of time to guide a chicken across a 10-lane freeway as many times as possible to score points.  So basically it's Frogger except that the river is replaced with more road.  I deliberately kept it simple and only focused on dodging, unlike my Frogger-inspired "Froggy!" from Pit of 100 Tiles.  I made this before the level named "Frogger" by Wes Powers got into CCLP1, so the similarity with that level is entirely coincidental!

This is named after the Price is Right game where contestants drop disks into a board with several layers of dividers on the way down, each of which deflects the disk left or right, until it lands in the bottom and they win a prize depending on where.  So for this level, you need to guide some Teeth down a series of passages, making them turn left or right to fall onto trap buttons.  It's not all that difficult, and the only mildly clever bit is getting the far-left or far-right traps open, where you need to either put yourself in harm's way on the trap button OR stand in the trap while luring the Teeth to release that trap.  Originally this was going to be later in the set, and the time limit was low to make it a mild time-crunch level, but I moved it earlier in the released version (and bumped up the time limit in a later update).

I realized after making this level that, unlike the game of Plinko, this level isn't very random, so I decided to make another Plinko-themed level, which became Level 73.

This was probably inspired by the ending of "Mud and Water" from CCLP3, where you have to use a Teeth to disrupt circling bugs and reach the exit.  Here I just put that aspect of the level a little more into focus; you have to collect all the chips in order to recruit the "serpentslayer" (a Teeth) to disrupt the "snake" of paramecia guarding the green keys and the exit.  The random force floors and ice corners inside the exit square were just supposed to look pretty, like a treasure horde of emeralds and a big diamond or something...not sure if that really came across.  Oh, and the blue wall maze in the bottom is a mirror image of the passages to the right of it...wonder how many people caught that!

One of my goals while making this set was to revisit older concepts in a more advanced way...and one way to do that was to tighten up forgiving causal levels into actual puzzles with much less room for error.  Even though the original "Build-a-Bridge Workshop" had a lot of blocks and was very open-ended, the concept lent itself well to making a strict puzzle with just enough blocks to complete.  Admittedly, this is a strange sequel because the aesthetics are so different (grid vs mess), but the core concept of using blocks and flippers to build bridges, so that you can pick up all the chips after losing the flippers, is still there.

It's extremely rare to have to slow down on force floors, so I made a level about it.  Of course, you can't stay in place while holding backwards on a force floor in Lynx on a straightaway, so I put a bend at the end of every path.  Unfortunately that may have made the timing trickier to visually gauge.  This level is short both because it's a pseudo "action level" and there were only so many ways I could think of at the time to use the concept.

The title comes from a scene in Star Fox 64 where you switch a train onto the wrong track, careening into a factory and causing a glorious explosion:

This is a concept I decided to try to build on a whim as a nod to "One Block Sokoban" from CCLP2.  The concept is just as it sounds--each puzzle is solved by pushing a single block a single time.  It's definitely not a difficult level (with a concept like this, it hardly could be), but I tried to make the rooms distinct and unusual enough to make for an interesting experience, and I think it turned out pretty well!

I deliberately set up the northwest ice checkerboard so that you can look around and see which way to push the block before making a decision.  The concept in the southeast room might remind you of "Excuse Me", but I actually made this level before "Excuse Me"!  (This was one of my first 33, while Excuse Me was created somewhere in the 34th-63rd range.)

So that's it for the 20s!  In my opinion this decade has a couple nice concepts but is a bit of a lull in the set, with the decades before and after being more interesting.