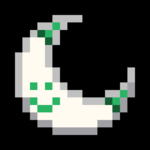 A fully comprehensive MSCC skin for CC2, not a single sprite or tile has not been looked over. Several of the tiles in here however are taken from other sets, the numbers are a few too many to count but basically if you made an MSCC styled CC2 sprite its probably in here.

Everything in this sheet has been reduced to the original 16 colours of the base game and all CC2 sprites have been adjusted to better fit the MSCC style.

Feel free to edit parts of this and use the tiles in your own set, I would be honoured if you did.

Issues: some tiles aren't exactly perfect, such as the foil which I couldn't get exactly right but is still somewhat MSCC, and the dirt patch tile which doesn't match its original MSCC appearance as I didn't want to give people who use smooth scrolling a seizure, logic gates remain unchanged other than colours as modifying those would A. throw people off and B. they already look fine.

Credits:
scutilla: for the original CC2 MS tileset that was improved heavily upon
Sickly Silver Moon: for most of the original overhaul work
Ryan J.: changes to many many tiles throughout iterations, solely responsible for the new ghost, and stay up + push down walls
ncrecc: For many new tiles and improvements including removal of animations and the new Transmogrifier and slime
The Chip's Challenge Discord Server Members: for their continued support, ideas, and suggestions for improvement
(Notably: Indy, IHNN, Chipster, Tyler, Naemuti, Flareon350, Cowman_133, Vehudur / Lessinath, Sharpeye & the other marketers; and plenty others who Chipped in to help and improve)
Ed Halley: for creating the original Microsoft tileset used in the Microsoft WEP release, without that this project wouldn't exist
And finally:

You: for taking the time to download and use this tileset, or even just consider looking at it. Without you this project would be pointless, thank you.

Set has been updated to be much more consistent throughout and matches with everything much better now, lots of tiles changed and issues fixed